Moderate hypofractionation with 15–16 fractions of 2.6–2.7 Gy has been accepted as the standard of care for whole-breast external beam radiotherapy (EBRT) for invasive breast cancer in many countries [ 1‐ 3]. This was based on the results from several well-powered randomized controlled trials showing comparable outcomes with regard to the risk of recurrence and chronic toxicity and with potential advantages in terms of reduced acute toxicity and improved cost-effectiveness [ 4‐ 12]. First results on hypofractionated post-mastectomy radiotherapy have been published [ 13‐ 15] with multiple trials on this topic and on hypofractionated regional nodal irradiation still ongoing. While there may be residual areas of debate, such as very young patients, rare histologic subtypes or patients with connective tissue diseases [ 16], there is now a broad consensus that moderate hypofractionation should be used preferentially after breast-conserving surgery when regional nodal irradiation is not indicated.
Boost irradiation was given sequentially with 5–8 fractions of 2 Gy in the START trials [ 6, 7] which led to prolongation of overall treatment time of 1–1.5 weeks. Since then, numerous trials have studied moderately hypofractionated radiotherapy with a simultaneous integrated boost (for review see [ 17]). However, oncological outcome results from two large randomized controlled phase III trials are still pending (RTOG 1005 [NCT01349322] and HYPOSIB [NCT02474641]). There are a number of reports of intraoperative boost irradiation for patients with breast cancer (for review see [ 18]). However, few trials studied the combination of hypofractionated whole-breast radiotherapy and intraoperative boost irradiation. First results from the prospective single-arm HIOB trial studying intraoperative boost irradiation with electrons followed by hypofractionated whole-breast radiotherapy have been published recently [ 19]. With a median follow-up of 45 months and 583 patients, toxicity rates and cosmetic outcome were favorable [ 19]. Regarding intraoperative boost irradiation with kV-photons, a prospective report of acute toxicity in 26 patients treated with hypofractionated whole-breast radiotherapy and intraoperative boost irradiation was published recently. There were no signs of unexpected toxicity [ 20].
Anzeige
A reduction of overall treatment time of EBRT to 1 to 1.5 weeks by increasing fraction size to a smaller treatment volume can be achieved by accelerated partial breast irradiation (APBI), where data from several phase III trials are available [ 21‐ 24]. However, in the RAPID trial, shortening overall treatment time to 5 to 8 days by giving two daily fractions of 3.85 Gy was associated with an increased risk of late toxicity and inferior cosmesis [ 24, 25].
Recently, results from FAST and FAST-Forward, two large randomized controlled trials testing 5‑fraction regimens for adjuvant whole breast radiotherapy, have been published [ 26, 27]. Due to the large fraction size of 5.2 to 5.6 Gy, we refer to these regimens as ultra-hypofractionation, in analogy to the nomenclature for prostate cancer. This article summarizes the results and provides an overview of potential implications for adjuvant radiotherapy in early breast cancer.

Results: The FAST and FAST-Forward trials

Re-analysis of the FAST-Forward data regarding late toxicity

To analyze the potential impact of follow-up on the outcomes in the FAST-Forward trial, percentages of marked and moderate normal tissue effects (NTE) for the physician-reported endpoints breast distortion, breast shrinkage, induration, telangiectasia, edema, and discomfort were extracted from Fig. A3a, c, e, g, i, k of the supplementary appendix in the FAST-Forward trial publication [ 26]. The number of patients with moderate or marked NTE (labeled as “quite in bit” and “very much”) were calculated from the extracted percentages and the number of patients at risk at 1, 2, 3, 4, and 5 years follow-up.
Binary logistic regressions for 40 or 26 Gy were performed separately for all NTE (Fig.  1) and for the sum of all NTE (Fig.  2). Confidence limits of regression lines were calculated based on the covariance matrix. To test for statistical significance between 40 and 26 Gy, a binary logistic regression model including the independent variables time (of follow-up) and group (40 and 26 Gy) was used. All p-values were derived from the Wald test. Calculations were carried out with a commercially available software package (SPSS Version 25).
×
×
In addition, relative risks for NTE in the 26 Gy arm of the trial compared to the 40 Gy arm were calculated based on the numbers of marked and moderate NTE and the patients at risk at all time points and end points (Fig.  3) including the sum of all NTE (Fig.  4). After logarithmic transformation, linear regressions were carried out for each individual NTE and the sum of all NTE. Confidence limits were calculated by using a standard software package (SPSS Version 25).
×
×
Anzeige
Binary logistic regressions showed significant differences in favor of the standard arm for induration, telangiectasia and edema as well as for the sum of all NTE (Figs.  1 and  2). Relative risks of moderate or marked NTE for patients treated with 26 Gy compared to patients treated with 40 Gy increased significantly ( p < 0.001) over time for all NTE except for telangiectasia (Figs.  3 and  4). The RR of the individual observations only reached significance ( p < 0.05) after 3 and more years of follow-up for breast induration and edema as well as the sum of all NTE, suggesting that clinically relevant disadvantages may become apparent with longer follow-up.

Based on the results of FAST and FAST-Forward, adjuvant whole-breast radiotherapy in 5 fractions should be used with caution in patients with a favorable long-term prognosis. However, it may be regarded as an additional option in the radiation oncology armamentarium, especially in elderly frail patients and in settings with limited health care resources. Nevertheless, in light of the excellent results of adjuvant breast cancer treatment nowadays, the bar is set high and a reduction in overall treatment time of two weeks should generally not be the only motivation to adopt a new standard of care. Tumor control and toxicity remain pivotal in the consideration of treatment options. Thus, shared-decision making regarding ultra-hypofractionated whole-breast radiotherapy in 5 fractions should include a discussion of residual uncertainties regarding long-term tumor control and a potential increase in late toxicity. To date, ultra-hypofractionated radiotherapy should not be used in patients who underwent mastectomy or who require regional nodal irradiation. Furthermore, in the absence of further data, caution is advised in young patients and patients with connective tissue diseases.

D. Krug has received honoraria from Merck Sharp & Dome, outside of the submitted work. J. Dunst is the principal investigator of the HYPOSIB trial. F. Sedlmayer is the principal investigator of the HIOB trial and has received a research grant from IntraOP Medical for the conduct of the trial. All authors, D. Krug, R. Baumann, S.E. Combs, M.N. Duma, J. Dunst, P. Feyer, R. Fietkau, W. Haase, W. Harms, T. Hehr, M.D. Piroth, F. Sedlmayer, R. Souchon, V. Strnad and W. Budach, are members of the German Society for Radiation Oncology (DEGRO).
Open Access This article is licensed under a Creative Commons Attribution 4.0 International License, which permits use, sharing, adaptation, distribution and reproduction in any medium or format, as long as you give appropriate credit to the original author(s) and the source, provide a link to the Creative Commons licence, and indicate if changes were made. The images or other third party material in this article are included in the article’s Creative Commons licence, unless indicated otherwise in a credit line to the material. If material is not included in the article’s Creative Commons licence and your intended use is not permitted by statutory regulation or exceeds the permitted use, you will need to obtain permission directly from the copyright holder. To view a copy of this licence, visit http://​creativecommons.​org/​licenses/​by/​4.​0/​. 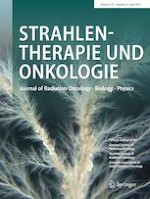