To assess the association between neighbourhood environmental variables and excessive transport-related and leisure-time sedentary behaviour (ETSB and ELSB, respectively) amongst adult women in Southern Brazil.

A cross-sectional survey was conducted using a representative sample of 1079 women 20 to 69 years of age who lived in 44 neighbourhoods. Each neighbourhood was determined by drawing a 400-m buffer around the median point of the participants’ homes. Neighbourhoods were assessed by audit and by using government data. Sedentary behaviour (SB) and the remaining individual variables were assessed via questionnaire that was administered as an interview. Multilevel logistic regression analysis was conducted.

In the adjusted analysis, women who lived in neighbourhoods with a higher percentage of terrain slope and fewer public recreation areas per resident had significantly (p ≤ 0.05) increased odds of exhibiting ETSB and ELSB, with 50% and 40% increases, respectively.

The results show that some aspects of the neighbourhood environment such as terrain slope and total public recreation areas per resident are related to specific SBs, indicating that improvements in neighbourhoods can reduce SB in women. 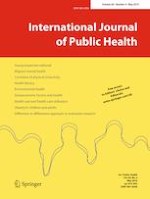 The impact of public health insurance on healthcare utilisation in Indonesia: evidence from panel data

Evaluating the impact of health policies: using a difference-in-differences approach

Association of objectively measured and perceived environment with accelerometer-based physical activity and cycling: a Swiss population-based cross-sectional study of children