Patients who undergo regional anesthesia experience anxiety in the preoperative period. Passiflora incarnata Linneaus is a plant that has traditionally been used as an anxiolytic and sedative. We aimed to investigate the effect of preoperative oral administration of Passiflora incarnata Linneaus on anxiety, psychomotor functions, sedation, and hemodynamics in patients undergoing spinal anesthesia.

Under local ethics committee approval, 60 patients who were aged 25–55 years and ASAI–II and who were scheduled for spinal anesthesia were enrolled in this prospective, randomized, double-blind and placebo-controlled study. Thirty minutes before spinal anesthesia, baseline hemodynamic parameters, State-Trait Anxiety Inventory (STAI) score, sedation score, and psychomotor function test results were measured, then patients were randomly assigned to two groups: oral Passiflora incarnata Linneaus extract or placebo was given to the patients. Tests were repeated just before spinal anesthesia. Hemodynamics, sedation score, sensory-motor block and side effects were assessed during the operation. Psychomotor function tests were repeated at the end of the operation and 60 min after the operation. 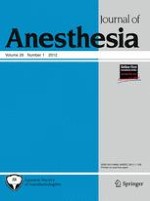 Safety and efficacy of oral rehydration therapy until 2 h before surgery: a multicenter randomized controlled trial

A case of anesthesia mumps after general anesthesia

A case of posterior reversible encephalopathy syndrome after emergence from anesthesia