Autologous stem cell transplantation (ASCT) is the only curable therapy for multiple myeloma (MM), while its success primarily relies on mobilization to obtain sufficient hematopoietic stem/progenitor cells (HPC). Although the role of Pegfilgrastim (PEG), a novel PEGylated form of the recombinant G-CSF filgrastim (FIL), in mobilization has been demonstrated, it remains unclear whether this approach is cost-effective in MM treatment. Here, we performed a real-world analysis to evaluate the efficacy and cost of PEG for mobilization in a cohort of MM patients, of which 53% carried high-risk cytogenetic abnormalities. A total of 91 patients who received either a single dose of PEG (6 or 12 mg, n = 42) or multiple dosing of 10 μg/kg/day FIL (n = 49) after chemotherapy for HPC mobilization were included. The yield of MNCs and CD34+ cells per milliliter of blood collected via apheresis was significantly greater in the PEG group than that in the FIL group (P = 0.014 and P = 0.038). Mobilization with PEG yielded significantly higher median number of collected CD34+ cells than FIL (5.56 vs. 4.82 × 106/kg; P = 0.038). Moreover, the average time-to-recovery of leukocytes and platelets after transplantation was markedly shorter in the PEG group than that in the FIL group (leukocyte, 11.59 ± 1.98 vs 12.93 ± 2.83 days, P = 0.019; platelet, 12.86 ± 2.62 vs 14.80 ± 5.47, P = 0.085). However, the total cost of mobilization and apheresis using PEG or FIL was comparable (P = 0.486). Of note, mobilization with 12 mg PEG further shortened time-to-recovery of leukocytes (10.64 ± 0.51 vs. 12.04 ± 2.26 days, P = 0.05) and platelets (10.60 ± 2.89 vs. 13.33 ± 2.35 days, P = 0.031) compared with 6 mg PEG. Our results support a notion that PEG (especially 12 mg) combined with chemotherapy is a cost-effective and convenient regimen of mobilization, which might improve the outcome of ASCT in MM. 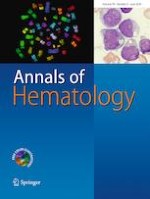 The concomitance of lymphoma and breast carcinoma in the bone

Long PFS of more than 7 years is achieved in 9% of myeloma patients in the era of conventional chemotherapy and of first-generation novel anti-myeloma agents: a single-center experience over 20-year period