PPFA composition was analyzed by gas chromatography in 21 women with GDM and from 21 with NGT, during the third trimester of pregnancy and 6 months after delivery. We used fatty acid product-to-precursor ratios to estimate desaturase activity, and we also measured in all women interleukins six and ten, tumor necrosis factor alpha and C-reactive protein.

Our data suggest that GDM does not influence PPFA composition and desaturase activity during pregnancy. In addition, late pregnancy characterized by hyperinsulinemia appears to upregulate desaturase Δ9-18 activity in NGT and GDM women. 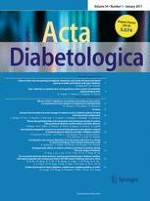 Cardiac dysfunction in type II diabetes: a bittersweet, weighty problem, or both?

The association between sleep duration, snoring and prevalent type 2 diabetes mellitus with regard to gender and menopausal status: the CKB study in Zhejiang rural area, China

Type 1 diabetes in Sardinia: facts and hypotheses in the context of worldwide epidemiological data

Clinical review: the misreporting of logbook, download, and verbal self-measured blood glucose in adults and children with type I diabetes