Therapeutic drug monitoring of tacrolimus is a major support to patient management and could help improve the outcome of lung transplant recipients, by minimizing the risk of rejections and infections. However, despite the wide use of tacrolimus as part of maintenance immunosuppressive regimens after lung transplantation, little is known about its pharmacokinetics in this population. Better knowledge of the pharmacokinetics of tacrolimus in lung transplant recipients, and the development of tools dedicated to its therapeutic drug monitoring, could thus help improve their outcome.

The aims of this study were (i) to characterize the population pharmacokinetics of tacrolimus in lung transplant recipients, including the influence of biological and pharmacogenetic covariates; and (ii) to develop a Bayesian estimator of the tacrolimus area under the blood concentration-time curve from time zero to 12 hours (AUC12) for its therapeutic drug monitoring in lung transplant recipients.

A population pharmacokinetic model was developed by nonlinear mixed-effects modelling using NONMEM® version VI, from 182 tacrolimus full concentration-time profiles collected in 78 lung transplant recipients within the first year post-transplantation. Patient genotypes for the cytochrome P450 3A5 (CYP3A5) A6986G single nucleotide polymorphism (SNP) were characterized by TaqMan allelic discrimination. Patients were divided into an index dataset (n= 125 profiles) and a validation dataset (n = 57 profiles). A Bayesian estimator was derived from the final model using the index dataset, in order to determine the tacrolimus AUC12 on the basis of a limited number of samples. The predictive performance of the Bayesian estimator was evaluated in the validation dataset by comparing the estimated AUC12 with the trapezoidal AUC12.

Tacrolimus pharmacokinetics were described using a two-compartment model with Erlang absorption and first-order elimination. The model included cystic fibrosis (CF) and CYP3A5 polymorphism as covariates. The relative bioavailability in patients with CF was approximately 60% of the relative bioavailability observed in patients without CF, and the transfer rate constant between the transit compartments was 2-fold smaller in patients with CF than in those without CF (3.32 vs 7.06 h-1). The apparent clearance was 40% faster in CYP3A5 expressers than in non-expressers (24.5 vs 17.5 L/h). Good predictive performance was obtained with the Bayesian estimator developed using the final model and concentrations measured at 40 minutes and at 2 and 4 hours post-dose, as shown by the mean bias (1.1%, 95% CI — 1.4, 3.7) and imprecision (9.8%) between the estimated and the trapezoidal AUC12. The bias was >20% in 1.8% of patients.

Population pharmacokinetic analysis showed that lung transplant patients with CF displayed lower bioavailability and a smaller transfer rate constant between transit compartments than those without CF, while the apparent clearance was faster in CYP3A5 expressers than in non-expressers. The Bayesian estimator developed in this study provides an accurate prediction of tacrolimus exposure in lung transplant patients, with and without CF, throughout the first year post-transplantation. This tool may allow routine tacrolimus dose individualization and may be used to conduct clinical trials on therapeutic drug monitoring of tacrolimus after lung transplantation. 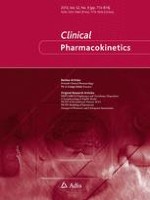 Evaluation of 5-Fluorouracil Pharmacokinetics in Cancer Patients with a C.1905+1G>A Mutation in DPYD by Means of a Bayesian Limited Sampling Strategy

Clinical Pharmacokinetics and Pharmacodynamics of Vildagliptin