C. difficile (CDI) has surpassed methicillin-resistant staph aureus as the most common nosocomial infection with recurrence reaching 30% and the elderly being disproportionately affected. We hypothesized that post-discharge antibiotic therapy for continued CDI treatment reduces readmissions.

We queried a 5% random sample of Medicare claims (2009–2011 Part A and Part D; n = 864,604) for hospitalizations with primary or secondary diagnosis of CDI. We compared demographics, comorbidities, and post-discharge CDI treatment (no CDI treatment, oral metronidazole only, oral vancomycin only, or both) between patients readmitted with a primary diagnosis of CDI within 90 days and patients not readmitted for any reason using univariate tests of association and multivariable models. 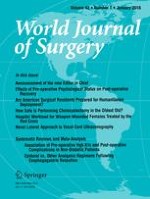 Younger Age is an Independent Factor for Graft Weight Overestimation: Analysis of the Clinical Impact on Recipient Outcomes in 340 Japanese Living Liver Donors

Axillobifemoral Bypasses: Reappraisal of an Extra-Anatomic Bypass by Analysis of Results and Prognostic Factors