Fetuses with large ventricular septal defects (VSDs) must be closely monitored during the perinatal period. Intrauterine assessment of size of septal defects with bidimensional echocardiography are unreliable. The objective of the present study is to document the contribution of flow pattern analysis in the fetal aortic isthmus for prenatal identification of large non-restrictive VSDs requiring immediate postnatal attention. We conducted a cross-sectional retrospective study of Doppler recordings from patients referred to our Fetal Cardiology Unit and diagnosed with one or multiple VSDs from January 2006 to November 2015. Three groups were defined: (1) large non-restrictive VSDs (n = 11) with postnatal cardiac failure (2) small restrictive VSDs (n = 28) asymptomatic, and (3) absence of cardiac abnormality (n = 66). The Isthmic end-Systolic Index (ISI) was computed to quantify aortic isthmus flow and compared between the three groups. Fetuses with restrictive VSD and control group showed similar ISI: stable at 0.20 ± 0.01 up to 27 weeks of gestation and dropping later due to the fall of end-systolic velocities in the aortic isthmus. By 35 weeks, a brief end-systolic retrograde flow was present, associated with a further fall of ISI down to −0.26 ± 0.05. In contrast, ISI of fetuses with large non-restrictive VSDs were unchanged throughout gestation (0.18 ± 0.06), becoming significantly higher during the last weeks of gestation compared to the two other groups (p < 0.001). In fetuses with VSDs, the ISI measurement from the aortic isthmus Doppler flow during the second half of gestation is a reliable predictor of a large non-restrictive defect with risk of major postnatal clinical impact. 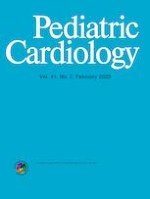 Does Repeated Measurement of a 6-Min Walk Test Contribute to Risk Prediction in Children with Dilated Cardiomyopathy?