From January 2014 to December 2017, 403 patients underwent complete orthodontic treatment. Inclusion criteria were the following: (1) patients without systemic diseases; (2) patients 11–43 years of age; (3) patients without a long history of medication; (4) nonpregnant women; (5) patients requiring orthodontic treatment; (6) patients who provided informed consent for orthodontic treatment and participation in the study, and who began and finished the entire treatment during the selected period; (7) patients without occlusal trauma; (8) patients diagnosed with mild or moderate chronic periodontitis and gingival recession level 2 by a periodontal specialist; (9) patients whose gingiva was at the inflammatory resting stage, at 3–6 months after basic periodontal treatment, whose bleeding index was less than 25% in full mouth probing examination, and who exhibited good oral hygiene and compliance. The study models, photographs, medical records, and panoramic radiographs of the selected patients before treatment were carefully reviewed.

The SPSS17.0 statistical software package was used for data processing. The statistical description was expressed as absolute number or rate. Paired rank data were evaluated by using the Wilcoxon rank sum test; logistic regression modeling was used to identify risk factors for gingival recession by univariate and multivariate logistic regression. All covariates with P-values less than 0.05 were included in the multivariate model. All statistical analyses were performed by SPSS17.0, with P-values <0.05 considered significant.

This work was supported by the Joint Fund of Yunnan Provincial Science and Technology Office and Kunming Medical University (2015FB077) and Fund from the Prevention and Treatment Center of Odontopathy, Yunnan Province, China (2014NS044).

From January 2014 to December 2017, 403 patients receiving complete orthodontic treatment in the Department Orthodontics of the Second People’s Hospital in Yunnan Province were recruited. This study was conducted in accordance with the Declaration of Helsinki. This study was conducted with approval from the Ethics Committee of the Second People’s Hospital of Yunnan. Written informed consent was obtained from all participants.
Open Access This article is distributed under the terms of the Creative Commons Attribution 4.0 International License ( http://​creativecommons.​org/​licenses/​by/​4.​0/​), which permits unrestricted use, distribution, and reproduction in any medium, provided you give appropriate credit to the original author(s) and the source, provide a link to the Creative Commons license, and indicate if changes were made. 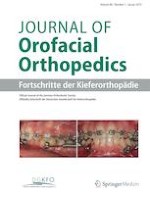