Acute appendicitis is the most common acute surgical abdominal pathology in children, and it has a large impact on morbidity and the costs incurred by health care systems. In low- and median-income countries, national information on the clinical and economic outcomes associated with this surgery does not exist. This study aimed to identify and describe the clinical and economic outcomes for children undergoing appendectomy in Colombia’s contributory system and to determine the prognostic factors associated with these outcomes.

A total of 21,674 children were included. The 30-day postoperative mortality rate was 0.06% [95% CI 0.02–0.9], the ICU admission rate was 8.00% [95% CI 7.63–8.36], the mean LOS was 2.48 days (SD 5.24), the readmission rate was 1.5% [95% CI 1.33–1.66] and the median cost for Colombia was 394 USD [p25–p75: 256–555]. The prognostic factors that were associated with the 30-day ICU admission rate, LOS and readmission rate were the insurer, geographic region, age, occurrence of an appendectomy with peritoneal drainage, and certain comorbidities, such as cancer and neurological, respiratory and gastrointestinal illnesses. The prognostic factors associated with costs were those previously mentioned as well as the occurrence of a laparoscopic appendectomy.

In Colombia’s contributory health system, large differences in clinical outcomes and the costs incurred by the system exist, and these differences are associated with the geographic region, the insurer, and some of the clinical characteristics of the children undergoing appendectomy. 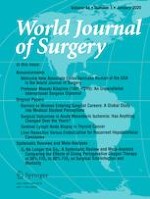 Pneumonectomy for Lung Cancer Treatment in The Netherlands: Between-Hospital Variation and Outcomes

Innovative Surgical Techniques Around the World