Secondary mitral regurgitation (MR) remains a challenging problem in the diagnosis and treatment of patients with heart failure. Although it is well known that secondary MR is dynamic, the impact of the severity of MR during exercise on long-term outcome has not been fully evaluated. The aim of the present study was to investigate the prognostic value of exercise stress echocardiography (ESE) in patients with secondary MR.

This prospective study included 118 consecutive patients with secondary MR and left ventricular dysfunction (mean ejection fraction at rest: 38 ± 14%) who underwent semi-supine ESE. Their major cardiovascular events (MACE) including cardiac death were followed up for a median of 41.7 (range: 6–128) months.

ESE provides prognostic information in patients with secondary MR that is useful for predicting long-term outcome. 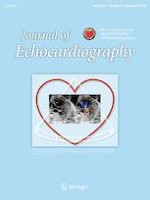 Incidental finding of a mass fitting into a patent foramen ovale