This study aimed to investigate the radiographic outcomes, rate of redislocation, and avascular necrosis of proximal femoral epiphysis (AVN) in patients aged 24 to 36 months with developmental dysplasia of the hip (DDH) treated by closed reduction (CR) and spica cast immobilization in human position.

We reviewed the medical records of 39 patients (51 hips) aged 24 to 36 months with DDH treated by CR and spica cast immobilization in human position. The Tönnis grade, rate of redislocation and AVN, acetabular index (AI), centre-edge angle (CEA), and Severin radiographic grade were evaluated on plain radiographs.

Our study showed that stable CR could be achieved in 76.5% of patients aged 24 to 36 months with DDH at the time of index procedure. Satisfactory outcomes can be expected in 56.4% of the cases (5.0% AVN rate), although late acetabular dysplasia may develop in 43.6% of the hips. 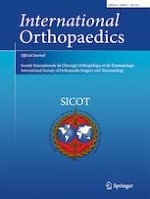