Compared to HIV-infected persons who do not inject drugs (non-IDU), persons who inject drugs (PWID) experience disparities in linking to medical care, initiating antiretroviral therapy (ART) and achieving viral suppression. There has been little attention to changes in these disparities over time. We estimated the proportion of PWID and non-IDU retained in care, on ART, and virally suppressed each year from 2001–2012 in the Johns Hopkins HIV Clinical Cohort (JHHCC). We defined active clinic patients as those who had ≥1 clinical visit, CD4 cell count, or viral load between July 1 of the prior year, and June 30 of the analysis year. Within a calendar year, retention was defined as ≥2 clinical visits or HIV-related laboratory measurements >90 days; ART use was defined as ≥1 ART prescription active ≥30 days; and viral suppression was defined as ≥1 HIV viral load <400 copies/mL. While PWID were less likely to be retained in earlier years, the gaps in retention closed around 2010. After 2003–2004, PWID and non-IDU retained in care had similar probability of receiving a prescription for ART and PWID and non-IDU on ART had similar probability of viral suppression. 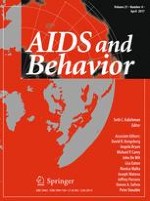 The Role of Internalized Stigma in the Disclosure of Injecting Drug Use Among People Who Inject Drugs and Self-Report as HIV-Positive in Kohtla-Järve, Estonia

Erratum to: Trends in Any and High-Dose Opioid Analgesic Receipt Among Aging Patients With and Without HIV

A Moderated Mediation Model of HIV-Related Stigma, Depression, and Social Support on Health-Related Quality of Life among Incarcerated Malaysian Men with HIV and Opioid Dependence