The aim of this article was to clarify recent risk factors for the early bronchopleural fistula after anatomical lung resection.

Reports on early bronchopleural fistula after anatomical lung resection in adults, including information on risk factors, published between 2006 and 2016 were reviewed and our institutional data were evaluated. The early period was defined as within 30 days from surgery or as described early in the manuscript.

Although recent studies have reached nearly the same conclusions as older reports, continuous research of potential risk factor is needed as therapeutic procedures continue to evolve. 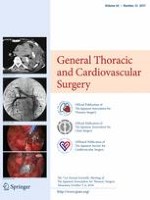 Current status of cardiovascular surgery in Japan, 2013 and 2014: a report based on the Japan Cardiovascular Surgery Database 5. Thoracic aortic surgery