Seizures are a frequent complication of brain injury, including intracerebral hemorrhage (ICH), where seizures occur in about a third of patients. Rodents are used to study pathophysiology and neuroprotective therapies after ICH, but there have been no studies assessing the occurrence of seizures in these models. Thus, we compared seizure incidence and characteristics after infusing collagenase (0.14 U), which degrades blood vessels, and autologous blood (100 μL) into the striatum of rats. Saline was infused in others as a negative control, whereas iron, a by-product of degrading erythrocytes, served as a positive control. Ipsilateral and contralateral electroencephalographic (EEG) activity was continuously monitored with telemetry probes for a week after the stroke. There were no electrographic abnormalities during baseline recordings. As expected, saline did not elicit any epileptiform activity whereas iron caused seizure activity. Seizures occurred in 66 % of the collagenase group between 10 and 36 h, their duration ranged from 5 to 90 s, and these events were mostly observed bilaterally. No such activity occurred after blood infusion despite comparable lesion sizes of 32.5 and 40.9 mm3 in the collagenase and blood models, respectively (p = 0.222). Therefore, seizures are a common acute occurrence in the collagenase but not whole blood models of striatal ICH (p = 0.028, for incidence). These findings have potential implications for ICH studies such as for understanding model differences, helping select which model to use, and determining how seizures may affect or be affected by treatments applied after stroke. 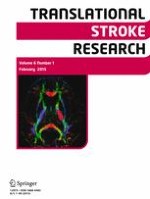 The Effects of Poststroke Aerobic Exercise on Neuroplasticity: A Systematic Review of Animal and Clinical Studies