In the pre-rituximab era, transformation of indolent B-cell lymphoma to diffuse large B-cell lymphoma (DLBCL) was associated with an extremely poor outcome and a median post-transformation survival ranging from 1 to 2 years. We evaluated the impact of rituximab-cyclophosphamide, adriamycin, vincristine, prednisone (R-CHOP) on the survival outcomes of transformed lymphoma compared with de novo DLBCL. Between 2002 and 2010, 317 DLBCL patients who were consecutively diagnosed and treated with R-CHOP were identified at our institution. Patients with transformed lymphoma were included if they had not previously received R-CHOP. Patient characteristics, treatment, and outcome data were retrospectively collected. Sixty patients (19 %) had transformed lymphoma of which 37 (62 %) had transformed from follicular lymphoma, 50 (83 %) were chemotherapy naïve, and 58 (96 %) were rituximab naïve at the time of treatment. With a median follow-up of 31.4 months, 231 patients achieved either complete response or complete response unconfirmed (73 %) with no significant difference between de novo DLBCL (n = 192, 75 %) and the transformed group (n = 39, 65 %) (P = 0.25). Six patients (15 %) relapsed in the transformed group at a median time to relapse of 29.3 months. The 2-year and 5-year overall survivals for all patients were 82 and 72 %, respectively. The overall and progression-free survivals for transformed lymphoma and de novo DLBCL were not statistically different (P = 0.45 and P = 0.38, respectively). With R-CHOP chemotherapy, the prognosis of transformed lymphoma in patients with minimal chemotherapy exposure for indolent disease is similar to that of de novo DLBCL. 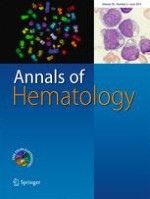 Therapy of HIV-associated lymphoma—recommendations of the oncology working group of the German Study Group of Physicians in Private Practice Treating HIV-Infected Patients (DAGNÄ), in cooperation with the German AIDS Society (DAIG)