To compare the accumulation and effect of liposomal doxorubicin in liver tissue treated by radiofrequency ablation (RFA) and irreversible electroporation (IRE) in in vivo porcine models.

Sixteen RFA and 16 IRE procedures were performed in healthy liver of two groups of three pigs. Multi-tined RFA parameters included: 100 W, target temperature 105°C for 7 min. 100 IRE pulses were delivered using two monopolar electrodes at 2250 V, 1 Hz, for 100 µsec. For each group, two pigs received 50 mg liposomal doxorubicin (0.5 mg/kg) as a drip infusion during ablation procedure, with one pig serving as control. Samples were harvested from the central and peripheral zones of the ablation at 24 and 72 h. Immunohistochemical analysis to evaluate the degree of cellular stress, DNA damage, and degree of apoptosis was performed. These and the ablation sizes were compared. Doxorubicin concentrations were also analyzed using fluorescence photometry of homogenized tissue.

Whereas there is an increased accumulation of periprocedural doxorubicin and an associated increase in ablation zone following RFA, a contrary effect is noted with IRE. These discrepant findings suggest that different mechanisms and synergies will need to be considered in order to select optimal adjuvants for different classes of ablation devices. 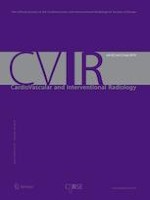 Regarding “Long-Term Evaluation of Percutaneous Groin Access for EVAR”

Fusion Imaging and Virtual Navigation to Guide Percutaneous Thermal Ablation of Hepatocellular Carcinoma: A Review of the Literature