The Great Irish Famine (1845–52) saw the Irish population fall by 20% as one million people died and another million emigrated. The Famine occurred at a time when the Irish asylums were growing rapidly anyway, so its precise effects on mental health are difficult although not impossible to study. Three groups merit consideration. First, for adults living through the Famine, starvation and poverty contributed to the continued rise in asylum presentations. Second, babies in utero during the Famine were reported to have accounted for an increase in first admissions when they reached the high-risk age for mental illness (1860–75). Third, the possibility of epigenetic effects (inherited changes in gene expression) as a result of Famine has been discussed as a possible mechanism whereby Famine survivors might have passed on experiences of physical and psychological trauma to their children and subsequent generations in a lasting, biological way. Intriguing as it is, this hypothesis requires further study, as does the distinctly uneven historiography of the Famine in relation to the Irish mental hospitals. 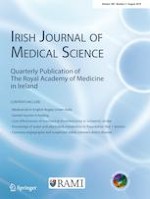 The purpose of ward rounds

Obesity and cardiovascular risk in an oncology day ward population