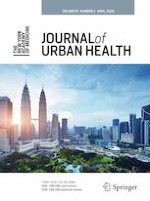 The Health Impact of Alcohol on American Cities: Modeling the Local Burden of Current Alcohol Use in One Jurisdiction

Living in High-SES Neighborhoods Is Protective against Obesity among Higher-Income Children but Not Low-Income Children: Results from the Healthy Communities Study

Improved Street Walkability, Incivilities, and Esthetics Are Associated with Greater Park Use in Two Low-Income Neighborhoods

The Association of Residential Instability and Hospitalizations among Homeless and Vulnerably Housed Individuals: Results from a Prospective Cohort Study

Privacy, Confidentiality, and Safety Considerations for Conducting Geographic Momentary Assessment Studies Among Persons Who Use Drugs and Men Who Have Sex with Men