The Role of the Cerebellum in Control of Swallow: Evidence of Inspiratory Activity During Swallow | springermedizin.de Skip to main content
TOOLBAR 1 2 3 4
SUCHE MENÜ 1 2 3 4

Anatomical connections are reported between the cerebellum and brainstem nuclei involved in swallow such as the nucleus tractus solitarius, nucleus ambiguus, and Kölliker-fuse nuclei. Despite these connections, a functional role of the cerebellum during swallow has not been elucidated. Therefore, we examined the effects of cerebellectomy on swallow muscle recruitment and swallow–breathing coordination in anesthetized freely breathing cats. Electromyograms were recorded from upper airway, pharyngeal, laryngeal, diaphragm, and chest wall muscles before and after complete cerebellectomy. Removal of the cerebellum reduced the excitability of swallow (i.e., swallow number), and muscle recruitment of the geniohyoid, thyroarytenoid, parasternal (chestwall), and diaphragm muscles, but did not disrupt swallow–breathing coordination. Additionally, diaphragm and parasternal muscle activity during swallow is reduced after cerebellectomy, while no changes were observed during breathing. These findings suggest the cerebellum modulates muscle excitability during recruitment, but not pattern or coordination of swallow with breathing. 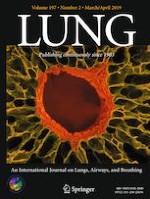 Correction to: The Burden of Sarcoidosis Symptoms from a Patient Perspective