The increase in second primary mesothelioma risk following radiotherapy for lymphoma is independent of several patient and disease characteristics, and is higher with earlier treatment era and longer latency. 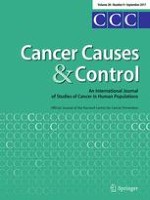 Erratum to: Risk of breast, endometrial, colorectal, and renal cancers in postmenopausal women in association with a body shape index and other anthropometric measures