Cervical length during the first trimester of pregnancy has not been completely investigated yet. The objective of our study is to compare cervical size in the first ten gestational weeks with that of non-pregnant women, and to determine its correlation with maternal factors, including age, anthropometric features, and reproductive history.

We collected retrospective data about women who applied to the Obstetrics and Gynecology Outpatients Facility of Udine between February and June 2009, selecting both pregnant and non-pregnant women possessing a transvaginal ultrasonographic measurement of their cervix, and focusing on their age, parity, BMI, cervical, and uterine size. Data were analyzed by R (version.2.8.0), considering significant P < 0.05.

135 women were recruited. By multivariate linear regression, both cervical length and width result independently influenced by pregnancy status, and among non-pregnant nullipara, cervical length results to be significantly lower in women younger than 20 (P < 0.05).

During the first ten gestational weeks, cervix results to be longer and wider than in non-pregnant women, suggesting the possible existence of early gestational, morphological, uterine, and cervical modifications. Women under the age of 20 have a significantly shorter cervix, suggesting an incomplete cervix maturity in this group of women, which may justify the higher prevalence of pre-term births in teenage pregnancies. 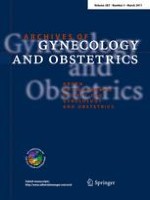 Exacerbation of a maternal hiatus hernia in early pregnancy presenting with symptoms of hyperemesis gravidarum: case report and review of the literature

No change in adolescents’ neglect on contraceptive use over two decades