Open fractures with severe soft tissue damage or swelling with risk of compartment syndrome often require a two-staged treatment approach with initial management by external fixation and subsequent treatment with an intramedullary nailing or plating [ 1, 2]. External fixation is also being employed for bone transport maneuvers to treat large bone defects [ 3] or to correct malalignments or dysplasias. Transdermal pins required for external fixation constitute a gate for bacteria and are associated with an increased risk of infection, both superficial as well as deep infections into the medullary canal [ 4, 5]. Thus, it is usually recommended to convert the external fixator to an internal fixation in less than 2 weeks [ 1, 2].
The most frequent complication in external fixation is infection of the pin tract and pin loosening [ 6, 7] which is thought to be related to necrosis of the bone and the surrounding tissue [ 8– 10]. Especially for self-drilling pins at high rotational speeds the temperatures occurring on the bone surface can reach levels that are detrimental to biological tissue. Temperatures around 80 °C were measured during the insertion of 5 mm pins without predrilling [ 11]. New pin-to-bar fixation systems with unicortical pins try to address both intramedullary infection and thermal necrosis. With unicortical pins the medullary canal is not penetrated and the risk of intramedullary infection might be diminished. Moreover, as unicortical pins need not to be drilled through the entire cortex the heat production during insertion is likely to be reduced compared to bicortical pins penetrating both cortices.
Anzeige
This study aims to investigate if the use of fixator systems with unicortical pins reduces the heat production during pin insertion compared to fixators with bicortical pins. We hypothesized that the temperatures occurring for the unicortical system would be lower than those occurring for the bicortical system. Temperature profiles within the bone and on the bone surface were analyzed during pin insertion with different rotational speeds.

Self-drilling pins from two different fixator systems were compared in this study: 12 unicortical pins (UNYCO, ORTHOFIX Srl, Bussolengo, IT, REF 93507, pin diameter: 6 mm) and 12 bicortical (Hoffmann II pins Stryker Corp, Kalamazoo, US-MI, REF 5018-6-180, pin diameter: 5 mm). The unicortical screws were inserted with the provided torque limiter according to the surgical technique. By inserting the pins into the cortical bone of the shaft area the torque limiter triggers before the tip is fully countersunk in the bone surface resulting in an effective diameter smaller than 6 mm (Fig.  1). This was compensated by using a smaller pin diameter for the bicortical comparison group.
×
The pins were inserted into fresh-frozen porcine tibiae (age: 6 months) provided by the local butcher. They were cut in halves to create cross-sectional areas and thawed until they reached room temperature (23 °C). Viewing directions of the cameras were defined as top view for the bone surface and front view for the cross-section of the bone (see Figs.  1, 2). Pin insertion was performed without predrilling in the tibial diaphysis at a distance of 8 mm from the cutting surface (Fig.  1).
Anzeige
×
The pins were inserted with a servo motor (PD6-N89, Nanotec Electronic GmbH & Co. KG, Feldkirchen, GER) which was mounted on an Instron E3000 material testing machine (Instron Ltd, High Wycombe, UK). The bones were fixed to the machine frame with a bench vise (MATRIX GmbH, Ostfildern, GER). The heat propagation was continuously monitored by two thermographic cameras (FLIR A655sc, Flir Systems, Inc., Portland, US-OR) from the start of pin insertion, triggered by the testing machine, until 3 min after complete insertion of each pin. According to the datasheet, the cameras had a resolution of 640 × 480 pixel, a noise equivalent temperature difference (NETD) of < 30 mK and an accuracy of ± 2 °C or ± 2% of reading. Ambient room temperature was kept constant by climate control and was continuously measured by a K101 digital thermometer (Voltcraft, Wollerau, CH).
To minimize off-center movement of the pin and to simulate the pin positioning of the surgeon before drilling, the pin touched the bone surface with a small force of 3 N prior to initiation of the drilling procedure. At 10 N preload the digital position of the testing machine was zeroed and a constant axial load of 100 N was applied. For both groups (unicortical and bicortical) three pin insertions were tested, respectively, for four rotational speeds (30, 225, 450, and 600 rpm), resulting in a total of 24 experiments. After each insertion a new unused pin was used.
For the unicortical pins, the pin insertion stopped either with the triggering of the torque limiter provided with the system or at an insertion depth of 15 mm (marked by a circular depression directly on the pin as a maximum insertion depth). For the bicortical pins the pin insertion was stopped when the pin penetrated the opposite cortex. A short burst of compressed air (< 1 s) was applied to the upper cortex directly after complete pin insertion (Fig.  3). The purpose of this was to remove bone debris originating from the drilling to provide an unrestricted view onto the drilling site for the upper infrared camera.
×
Testing was performed at room temperature (23 °C). Bones were alternated for testing and sawing (to create the new cross-sections) in such a way that they would always cool down again to ambient temperature. 12 halved bone specimens were circled through the testing and sawing process.

For both camera views an elliptical mask was fitted on the region of interest representing two surface areas of 179 mm 2 (top view) and 320 mm 2 (front view) (Fig.  4) that were prone to temperature changes. In the top view the maximum temperature which occurred during the insertion process was assessed. As the top view always included the pin it was confirmed that the maximum temperature would not occur on the pin by adjusting the ROI placement accordingly.
×
Anzeige
Furthermore, to visualize the amount of bone affected by the rise in temperature, the top view was further analyzed. After removal of the bone debris with compressed air the area in mm 2 for each specific temperature within the top view ROI was determined.
Statistical analysis was performed by Student’s t test for independent samples comparing the unicortical and bicortical pins for each rotational speed. Level of significance was set to α = 0.05. Calculations were performed in Microsoft Excel 2010 (Microsoft Corp, Redmond, US-WA).

The institution of the authors obtained financial support by Orthofix, Bussolengo/Verona, Italy.
Open AccessThis article is distributed under the terms of the Creative Commons Attribution 4.0 International License ( http://​creativecommons.​org/​licenses/​by/​4.​0/​), which permits unrestricted use, distribution, and reproduction in any medium, provided you give appropriate credit to the original author(s) and the source, provide a link to the Creative Commons license, and indicate if changes were made. 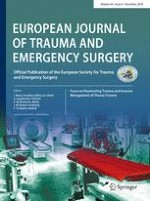 Should pre-hospital resuscitative thoracotomy be reserved only for penetrating chest trauma?