Use of prognostic factors of rheumatoid arthritis in clinical practice and perception of their predictive capacity before and after exposure to evidence | springermedizin.de Skip to main content
TOOLBAR 1 2 3 4
SUCHE MENÜ 1 2 3 4

The aim of the study is to benchmark the use and attributed importance of well-established prognostic factors in rheumatoid arthritis (RA) in daily clinical practice, and to contrast the use of factors with their ability to predict outcome. Medline was searched (inception-Sep. 2016) for systematic reviews on factors predicting death, disability, structural damage or remission in RA. All factors identified were compiled in a matrix of factors × outcomes, and scoping reviews for each cell were then performed. A survey to 42 rheumatologists randomly selected explored the use of the list of prognostic factors and inquired about the perceived strength of association with poor prognosis. In a second round, participants were exposed to evidence from the matrix and to responses from other participants. Change on perceived strength of association was evaluated. Rheumatologists report using prognostic factors in clinical practice on a daily basis. Very young onset, joint counts at diagnosis, rheumatoid factor, ACPA, and radiographic erosions are used frequently and correctly recognized as strong predictors. Comorbidities and other associated problems, such as obesity, low bone mineral density, cardiovascular disease, or extra-articular manifestations, are perceived as moderately associated to prognosis but, nevertheless, rheumatologists also use them profusely. Genetic and other biomarkers and osteitis by magnetic resonance are less accessible in daily practice and they obtained better results on second round (probably after knowing the strength of association with prognosis). Rheumatologists use widely most prognostic factors with a strong predictive value. However, factors with low evidence of prognostic value are also used and some factors are not used despite good evidence. 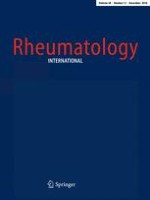 The role of mirtazapine in patients with fibromyalgia: a systematic review