We report a case of vimentin-positive early gastric adenocarcinoma arising in a hyperplastic polyp (HP). A 72-year-old Japanese man was admitted for the detailed examination of a gastric polyp. He had a subtotal gastrectomy due to acute abdomen 12 years ago. Upper endoscopy revealed a pedunculated polyp measuring approximately 2 cm on the greater curvature of upper body of the remnant stomach. Magnifying endoscopy revealed that the microsurface pattern was irregular and partially absent accompanied with irregular microvessels at the upper end of the polyp. We speculated that the lesion was an adenocarcinoma arising in the HP. Endoscopic submucosal dissection (ESD) was performed. Histological examination of the ESD specimen revealed that the lesion consisted of well- to poorly differentiated adenocarcinoma at the protruding lesion and foveolar hyperplastic epithelia at the base of the polyp. Immunohistochemically, most of tumor cells that comprised poorly-differentiated adenocarcinoma were positive for both cytokeratin and vimentin. Although carcinomas have occasionally been found in HPs, the histological features of the present case are considered extremely unusual. To the best of our knowledge, this is the first case of vimentin-positive early gastric carcinoma arising in a HP. 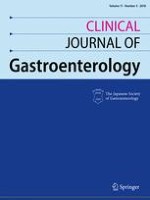 Correction to: Diagnostic significance of SPACE for PCIS