Symptoms of interstitial cystitis/bladder pain syndrome (IC/BPS) are often confused with uterine conditions. Gynecologists may therefore recommend hysterectomy which was inappropriate for these patients. This study investigated whether IC/BPS increases the risk of hysterectomy in a large nationwide retrospective cohort study.

From the Longitudinal Health Insurance Database 2010 (LHID2010) in Taiwan, we identified women diagnosed with IC/BPS between 2002 and 2013. Those with a history of hysterectomy before IC/BPS diagnosis were excluded. All women were stratified into three subgroups (younger, middle, older age) based on the propensity scores of 15 confounding factors, including age and comorbidities. All were followed until the end of 2013 to detect the event of hysterectomy. The hazard ratio (HR) of hysterectomy in the IC/BPS cohort was compared with the non-IC/BPS cohort among the three subgroups by Cox regression after adjusting for confounding factors.

In addition to the representative middle age, subgroup 2 had similar rates of comorbidities as the general population. The study was both externally and internally valid. The risk of hysterectomy in the IC/BPS cohort (n = 536) was significantly higher than in the non-IC/BPS cohort (n = 103846) in subgroup 2 (HR = 1.701, 95 % CI 1.056–2.740). The mean time to hysterectomy after diagnosis of IC/BPS was 2.97 years.

In this nationwide study, we found that IC/BPS has a causal impact on hysterectomy in the middle-age subgroup in LHID 2010. The possibility of a woman having IC/BPS should be evaluated prior to hysterectomy to avoid inappropriate surgery. 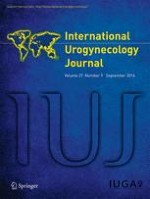 The human urinary microbiome and how it relates to urogynecology