We developed an image-guided intervention robot system that can be operated in a magnetic resonance (MR) imaging gantry. The system incorporates a bendable needle intervention robot for breast cancer patients that overcomes the space limitations of the MR gantry.

Most breast coil designs for breast MR imaging have side openings to allow manual localization. However, for many intervention procedures, the patient must be removed from the gantry. A robotic manipulation system with integrated image guidance software was developed. Our robotic manipulator was designed to be slim, so as to fit between the patient’s side and the MR gantry wall. Only non-magnetic materials were used, and an electromagnetic shield was employed for cables and circuits. The image guidance software was built using open source libraries. In situ feasibility tests were performed in a 3-T MR system. One target point in the breast phantom was chosen by the clinician for each experiment, and our robot moved the needle close to the target point.

We successfully developed an MR-guided needle intervention robot for breast cancer patients. Further research will allow the expansion of these interventions. 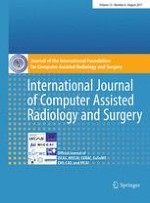 OR.NET: multi-perspective qualitative evaluation of an integrated operating room based on IEEE 11073 SDC