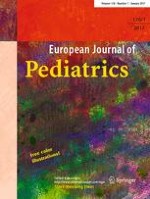 Diabetes screening in overweight and obese children and adolescents: choosing the right test

Predictors of motor developmental milestones during the first year of life

The course of skull deformation from birth to 5 years of age: a prospective cohort study

To screen or not to screen for vesicoureteral reflux in children with ureteropelvic junction obstruction: a systematic review