Little information is available regarding the relationship between alcoholic liver diseases (ALD) and the development of gastric neoplasia.

The aim of this study was to examine whether ALD is associated with the increased risk of gastric neoplasia.

We reviewed the medical records 514 patients diagnosed with ALD at Seoul Metropolitan Government Boramae Hospital between January 2000 and December 2011. Control subjects were selected by using propensity score matching (age, sex, and body mass index) from 8190 members of the general population who underwent EGD for screening for gastric neoplasia at Boramae Health Promotion Center during the study period. We compared the frequency of gastric neoplasia between the two groups and evaluated the risk factors for the development of gastric cancer in patients with ALD. In addition, we compared the frequency of gastric cancer between patients with ALD and those with nonalcoholic steatohepatitis (NASH). 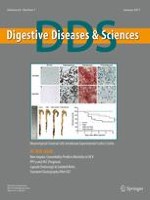 Intestinal Ischemia–Reperfusion: Rooting for the SOCS?

Mega-Cecum: An Unrecognized Cause of Symptoms in Some Female Patients with Uro-Gynecological Symptoms and Severe Slow Transit Constipation