Methods available for assessing the learning curve, such as a predefined number of procedures or direct mentoring are lacking. Our aim was to describe the use of a statistical method to identify the minimal training length of an experienced sonographer, newly trained in deep infiltrating endometriosis (DIE) mapping by evaluating the learning curve of transvaginal ultrasound (TVUS) in the preoperative assessment of endometriosis.

A retrospective study in a tertiary referral center for endometriosis. Reports and stored data from TVUS scans performed by one operator with training in general gynecological ultrasound, but not in endometriosis mapping, were analyzed retrospectively for patients who subsequently underwent laparoscopy, which served as a reference standard. The performance of TVUS was assessed for the following sites: endometriomas, bladder, vagina, pouch of Douglas, bowel and uterosacral ligaments, and correlated with laparoscopic findings. Sensitivity, specificity, PPV, NPV, and accuracy were calculated, and the operator’s diagnostic performance was assessed using the learning curve cumulative summation test (LC-CUSUM).

Data from 94 women were available for analysis. The learning curve using the LC-CUSUM graph showed that the sonographer reached the predefined level of proficiency in detecting endometriosis lesions after 20, 26, 32, 31, 38, and 44 examinations for endometriomas, bladder nodules, vaginal nodules, pouch of Douglas obliteration, bowel nodules, and uterosacral ligament nodules, respectively.

LC-CUSUM allows monitoring of individual performance during the learning process of new methodologies. This study shows that a sonographer trained in general gynecologic ultrasonography, who devotes time to learn TVUS for DIE mapping, can achieve proficiency for diagnosing the major types of endometriotic lesions after examining less than 50 patients who subsequently undergo surgery in a training setting. 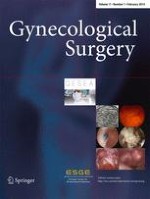 The effect of music in gynaecological office procedures on pain, anxiety and satisfaction: a randomized controlled trial