Chronic diabetes is associated with cardiovascular dysfunctions. Diabetic cardiomyopathy (DCM) is one of the serious cardiovascular complications associated with diabetes. Despite significant efforts in understanding the pathophysiology of DCM, management of DCM is not adequate due to its complex pathophysiology. Recently, involvement of protease-activated receptors (PARs) has been postulated in cardiovascular diseases. These receptors are activated by thrombin, trypsin, or other serine proteases. Expression of PAR has been shown to be increased in cardiac diseases such as myocardial infarction, viral myocarditis, and pulmonary arterial hypertension. However, the role of PAR in DCM has not been elucidated yet. Therefore, in the present study, we have investigated the role of PAR in the condition of DCM using a pharmacological approach. We used argatroban, a direct thrombin inhibitor for targeting PAR.

This study suggests the ameliorative effects of argatroban in diabetic cardiomyopathy by improving ventricular functions and reducing fibrosis, inflammation, apoptosis, and PAR expression. 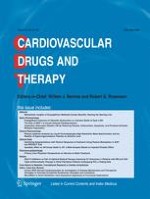 MicroRNAs in Atrial Fibrillation: from Expression Signatures to Functional Implications

Effect of Apixaban on All-Cause Death in Patients with Atrial Fibrillation: a Meta-Analysis Based on Imputed Placebo Effect