Evaluating the extent of cerebral ischemic infarction is essential for treatment decisions and assessment of possible complications in patients with acute ischemic stroke. Patients are often triaged according to image-based early signs of infarction, defined by Alberta Stroke Program Early CT Score (ASPECTS). Our aim was to evaluate interrater reliability in a large group of readers.

We retrospectively analyzed 100 investigators who independently evaluated 20 non-contrast computed tomography (NCCT) scans as part of their qualification program for the TENSION study. Test cases were chosen by four neuroradiologists who had previously scored NCCT scans with ASPECTS between 0 and 8 and high interrater agreement. Percent and interrater agreements were calculated for total ASPECTS, as well as for each ASPECTS region.

Interrater agreement reliability for total ASPECTS and study enrollment was relatively low but seems sufficient for practical application. Individual region analysis suggests that some are particularly difficult to evaluate, with varying levels of reliability. Potential impairment of the supraganglionic region must be examined carefully, particularly with respect to the decision whether or not to perform mechanical thrombectomy.
Hinweise
The authors Noel van Horn and Helge Kniep contributed equally to the manuscript.

Alberta Stroke Program Early CT Score (ASPECTS) is a diagnostic tool for the assessment of the extent of early ischemic lesions in anterior circulation stroke and is used to select patients for mechanical thrombectomy (MT) [1, 2]. As a semiquantitative grading system, ASPECTS estimates the extent of early ischemic changes on non-contrast computed tomography (CT) for ten regions within the middle cerebral artery territory and has been demonstrated to be predictive of clinical outcome [3].
Clinical guidelines on the management of acute ischemic stroke (AIS) patients with large vessel occlusion recognize a baseline ASPECTS ≥ 6 as a key selection criterion for MT [4, 5]; however, different ASPECTS thresholds have been employed to selectively enrol patients in various clinical trials, thereby complicating stroke assessment and subsequent therapeutic considerations in the clinical routine [6‐11]. Of these trials two (MR CLEAN and THRACE) independently demonstrated the benefit of MT based on non-contrast computed tomography (NCCT), the modality most commonly used for initial evaluation [4, 10, 11]. Although ASPECTS has also been shown to be useful in identifying patients eligible for MT who present in the late time window, selection of this subgroup is typically based on advanced imaging criteria [5, 12‐15].
Anzeige
The NCCT is an essential diagnostic tool in the management of AIS patients due to its speed and broad availability as well as its accuracy in excluding intracranial hemorrhage; however, the level of interrater agreement in the interpretation of early ischemic lesions on NCCT varies in the literature [16, 17] and is limited, reported by a systematic review analyzing 15 studies on interrater reliability ranging from fair to substantial agreement according to the Fleiss classification [18]. Despite the importance of this diagnostic tool in the selection of patients for MT, no study examining the interrater reliability among a large number of readers has been performed. We hypothesized that the interrater reliability decreases with an increasing number of readers, regardless of expertise or experience.
With the efficacy and safety of thrombectomy in stroke with extended lesion and extended time window (TENSION) trial [19], we sought to evaluate the interrater reliability of a large number of readers in the assessment of total baseline ASPECTS, as well as the individual ASPECTS regions, in patients with severe anterior circulation stroke (ASPECTS 3–5). Our goal was to identify how such potential rater-dependent differences affect the treatment decision-making process.

This retrospective study was approved by the leading ethics committee of the local ethics committee. All patient data, study protocols and procedures were conducted in accordance with the Declaration of Helsinki and informed consent was obtained. All data used for training and validation in this study are available from the corresponding author upon reasonable request.

The TENSION trial is a European investigator-initiated, prospective, open label, blinded endpoint (PROBE) [19], randomized, controlled, two-arm trial to examine the safety and effectiveness of MT compared to best medical care alone in the treatment of AIS patients with extensive early ischemic lesions (defined by an ASPECTS of 3–5) in an extended time window (up to 12 h from onset or last seen well) [20]. Only patients presenting with AIS due to focal occlusion of the M1 segment of the MCA, and/or the intracranial segment of the distal internal carotid artery, determined by either magnetic resonance angiography or computed tomography angiography were included. Subjects who met the inclusion criteria were randomized in a 1:1 ratio to either (1) best medical care alone or (2) best medical care with MT. The primary endpoint was functional outcome after 90 days post-stroke measured by modified Rankin scale (mRS90).
Anzeige

The TENSION ASPECTS Image Reading Academy, a web-based training tool, was developed to qualify investigators for study-specific image assessment and ASPECTS reading (Eppdata, Hamburg, Germany). To that end, 56 cases from our stroke database were identified with a preliminary ASPECTS of 0–8, and evaluated by 4 highly experienced neuroradiologists (> 20 years of experience each, GOLD rater) in accordance with the ASPECTS grading system. The image assessment tool allowed the evaluator to window, zoom, and pan individually at a slice thickness of 4 mm. For 30 of the cases at least 3 of the 4 GOLD raters were in agreement for each individual ASPECTS region. Of these, 10 were implemented in the online training tool as training module cases, while the remaining 20 comprised the rating module. Only those who successfully completed the training modules (at least 80% correct answers) were granted participation in rating module and subsequently included for further analysis.

The first 100 TENSION investigators who successfully concluded the above defined ASPECTS training and testing were analyzed. All of them were experienced radiologists whose everyday clinical practice is to select AIS patients for MT. Early ischemic change was defined as the presence of hypodensity and/or loss of grey-white differentiation. Raters were not blinded within the test module to clinical details, affected site, time since onset, age and NIHSS. Raters provided a score for each ASPECTS region in a binary manner with 1, scoring for an affected region, and 0 for an unaffected one. Total ASPECTS score of 0–10 was simultaneously calculated based on these per region ratings and displayed to the raters.

Concordance of ASPECTS was evaluated using percent and interrater agreement (Krippendorff’s α [21]) at two different levels of tolerance allowance: a) zero tolerance (because deviations of one scoring point could lead to different therapeutic decisions) and b) tolerance ranges according to the TENSION inclusion criteria (ASPECTS 0–2 vs. 3–5 vs. 6–10). Concordance for binary per region ratings were calculated for percent agreement and interrater agreement using Gwet’s AC1 [22]. These metrics have been found to be unbiased in cases of high prevalence [21] (e.g., infarct demarcation in the insular region is present in almost all AIS patient scans). Values of interrater agreement are demonstrated with 95% confidence intervals (bootstrap using 1000 replicates). Furthermore, percentage shares of concordant ratings were calculated per region and per case (all raters with concordant ratings: 100%; 50/50 scoring: 50%). All data analyses were conducted using R 3.6.2 (R Core Team, 2019, Vienna, Austria) with irrCAC 1.0 and irr 0.84.1 packages [23].

Interrater agreement reliability for total ASPECTS and study enrollment was relatively low but seems sufficient for practical application. Per region analysis suggests that some ASPECTS regions are particularly difficult to evaluate, with varying levels of interrater reliability. Based on our observations, a decision to exclude patients from MT based on involvement of the supraganglionic regions should be considered with particular care. We consider these observations to be practically relevant as they are based on the findings of a large number of raters, all with considerable job experience and who are all highly motivated to achieve good rating results and, more importantly, the best patient outcome. 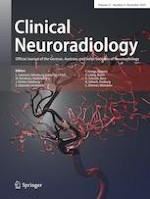