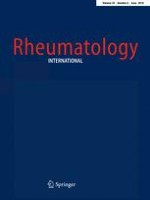 Serum drug levels of biologic agents in the management of rheumatoid arthritis and spondyloarthritis: a systematic review

Detection of Shigella spp. nucleic acids in the synovial tissue of Tunisian rheumatoid arthritis patients and other forms of arthritis by quantitative real-time polymerase chain reaction

CT assessment of axillary lymphadenopathy in patients with rheumatoid arthritis: association with disease activity and severity

From blood coagulation to innate and adaptive immunity: the role of platelets in the physiology and pathology of autoimmune disorders