After prospective examination of all but two family members, the medical records of 16 affected patients (21 eyes) of two families from the Netherlands with autosomal dominantly inherited RRD were retrospectively evaluated. Special attention was paid to the age at onset, the ocular morphology and the clinical appearance of the RRD. The type and number of the various surgical procedures were analyzed with respect to preoperative appearance of the RRD, postoperative results and final visual acuity.

The mean age at onset of RRD of affected individuals in families A and B was 37±18 years and 19±10 years, respectively. The mean ocular axial length in the two families was 24.7 mm and 26.7 mm. The mean number of retinal defects preoperatively found was 2.2 in family A and 7.1 in family B. Round, atrophic retinal holes predominated. Two of 21 affected eyes showed significant preoperative proliferative vitreoretinopathy. Pars plana vitrectomy was the primary procedure in 4 cases; extra ocular buckling was the initial procedure in 15 cases. One eye received scleral folding with diathermy as primary surgery. Redetachment following surgery occurred in 5 of 10 cases in family A and 4 of 10 eyes in family B. Anatomical success could be achieved in 9 of 10 and 8 of 10 eyes in families A and B, respectively.

In these families the prevalence of RRD is high. Most patients were affected at a relatively young age compared with non-genetically linked forms of RRD. Because of the low success rate of surgical intervention and, subsequently, the high number of operations necessary to achieve reattachment of the retina, the use of diagnostic genetic techniques to identify individuals at risk would be advisable. In these subjects measures to prevent RRD are an option, even when anatomical substrates of precursors of RRD are absent. 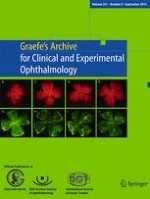 Deficits of spatial localization in children with strabismic amblyopia

Proliferative Vitreoretinopathie-Prozess – „To heal or not to heal“