Abnormalities in the BEST1 gene have recently been recognised as causing autosomal recessive bestrophinopathy (ARB). ARB has been noted to have a variable phenotypic presentation, distinct from that of autosomal dominant Best vitelliform macular dystrophy (BVMD). Both conditions are associated with deposits in the retina, a reduced or absent electro-oculography (EOG) light rise, and the risk of developing angle-closure glaucoma. Herein, we describe the clinical and genetic characteristics of a young male diagnosed with ARB associated with angle-closure glaucoma resulting from a novel homozygous mutation in BEST1.

All research involved in this case adhered to the tenets of the Declaration of Helsinki. The proband underwent slitlamp examination, retinal autofluorescence imaging and optical coherence tomography after presenting with deteriorating vision. The findings prompted genetic testing with bi-directional DNA sequencing of coding and flanking intronic regions of BEST1. The proband’s family members were subsequently screened.

A provisional diagnosis of ARB was made based on the findings of subretinal and schitic lesions on fundoscopy and retinal imaging, together with abnormal EOG and electroretinography. Genetic testing identified a novel homozygous mutation in BEST1, c.636+1 G>A. Family members were found to carry one copy of the mutation and had no clinical or electrophysiological evidence of disease. The proband was additionally diagnosed with angle-closure glaucoma requiring topical therapy, peripheral iridotomies and phacoemulsification.

Phenotypic overlap, reduced penetrance, variable expressivity and the ongoing discovery of new forms of bestrophinopathies add to the difficulty in distinguishing these retinal diseases. All patients diagnosed with ARB or BVMD should be examined for narrow angles and glaucoma, given their frequent association with these conditions.

Autosomal recessive bestrophinopathy (ARB) has recently been described and has a more global influence on eye development and physiology than autosomal dominant Best vitelliform macular dystrophy (BVMD), otherwise known as Best disease. We present a case of ARB associated with narrow-angle glaucoma and a novel homozygous mutation in BEST1.

A 26-year-old male presented with deteriorating vision in both eyes. He had no family history of eye disorders but had been diagnosed with possible Stargardt disease at the age of 12 years. This diagnosis was amended to exudative polymorphous vitelliform macular dystrophy two years later when he underwent electrophysiological studies which revealed normal rod electroretinography (ERG) but abnormal flicker ERG with b-wave delay and abnormal electro-oculography (EOG) (Fig. 1a). A trial of steroids had no benefit at that time.
×
Anzeige
He was referred to us for a second opinion 12 years later. Best-corrected visual acuity (BCVA) was 6/36 right and 6/60 left. He had minimal refractive error of 0.5 dioptre spherical equivalent hyperopia in each eye. Intraocular pressure (IOP) was 13 mmHg right and 16 mmHg left. Fundoscopy revealed normal optic discs but a grossly abnormal retina bilaterally, with widespread subretinal yellow lesions which autofluoresced (Fig. 2a) and schitic changes at the foveae (Fig. 2b). Electrophysiology had deteriorated significantly and now demonstrated delayed and reduced rod responses, further delayed photopic and flicker ERG and reduced P50 in the pattern ERG and a grossly abnormal multifocal ERG. The EOG remained grossly abnormal (Fig. 1b). Testing for possible infective and inflammatory conditions was negative.
×
A provisional diagnosis of ARB was made, and a trial of oral acetazolamide initiated in the light of reports of improvement in schitic changes in retinal dystrophies with carbonic anhydrase inhibitors [1]. Anatomical improvement in the central retinal thickness was noted whilst on treatment over a 6-month period. BCVA improved to 6/18 right eye, with no change in that for the left (Fig. 3).
×
The day after one of his follow-up visits during which dilated fundoscopy and retinal imaging was performed, and the dose of his acetazolamide was halved to 250 mg twice daily due to mild systemic side effects, he returned for unscheduled review, reporting left eye discomfort and increasing floaters. Visual acuity was unchanged. However, left IOP was markedly raised at 38 mmHg, compared with 4 mmHg for his right eye. A narrow drainage angle was noted bilaterally, but it was significantly narrower in the left eye, with a shallow anterior chamber and ‘volcano sign’. Subacute angle-closure glaucoma was diagnosed and effectively treated initially with topical anti-hypertensives and peripheral iridotomies. However, left-sided IOP continued to rise over a few days to 60 mmHg. B-scan ultrasound excluded choroidal effusion and confirmed plateau iris. His axial length measured 21.64 mm right and 22.06 mm left, and his anterior chamber depth was 2.48 mm right and 2.47 mm left. His optic disc was not cupped, with a cup-to-disc ratio of less than 0.4 bilaterally. Phacoemulsification lens extraction was eventually required to lower the IOP, and a 24.0 dioptre posterior chamber lens (A-constant 119.0) was inserted uneventfully. IOP was controlled at 18 mmHg thereafter but required continued use of topical prostaglandin and beta-blocker.
Bi-directional DNA sequencing of coding and flanking intronic regions of BEST1 revealed that the patient was homozygous for a novel splice variant, c.636+1 G>A. This substitution was predicted to be pathogenic by abolishing the conserved donor splice site (Mutation Taster; Human Splicing Finder v2.4.1; NN SPLICE) [2], with potential usage of a cryptic donor splice site present 294 bp downstream in intron 5 (0.88 NN SPLICE). Cascade family testing identified this patient’s non-consanguineous parents and sister as carriers. They were asymptomatic and did not show signs of disease, with completely normal vision, fundi, anterior segments and electrophysiology.
Anzeige 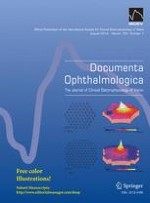