The objective of this study is to identify single-nucleotide polymorphisms (SNPs) predictors of treatment nonresponse to the first anti-TNF-alpha agent in ankylosing spondylitis (AS). Patients were classified as “nonresponders” if they failed to achieve improvement ≥50 % of the initial BASDAI. We selected candidate SNPs previously reported, associated with susceptibility or pathogenesis of AS and with other spondylarthropaties (SpAs). The predictors of nonresponse were modeled with multiple logistic regression. The predictive power of the genetic model of nonresponse to treatment was tested with AUC-ROC. One hundred and twenty-one (121) AS patients fulfilled the inclusion criteria. Of the candidate SNPs tested for association with treatment effectiveness, five independent predictors were identified: rs917997, rs755622, rs1800896, rs3740691, and rs1061622. The genetic model of nonresponse to treatment had a predictive power of 0.77 (95 % CI 0.68–0.86). Our study identified several polymorphisms which could be the useful genetic biomarkers in predicting nonresponse to anti-TNF-alpha therapy. 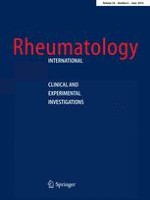 Antiphospholipid antibodies in children with Kawasaki disease: a preliminary study from North India