An outbreak of foot-and-mouth disease (FMD) in Egypt affected approximately 40,000 cattle and water buffaloes and killed more than 4,600 animals during February-March 2012. To investigate the etiology of the 2012 outbreak, specimens were collected from six governorates and analyzed using universal primers to amplify the 5′ untranslated region (UTR) by reverse-transcription polymerase chain reaction. Only FMDV-SAT2 was detected, with an overall detection rate of 80.3 %. Complete VP1- and leader-proteinase-coding sequences, obtained from three isolates from three different governorates, were compared with previously reported sequences. Phylogenetic analysis of these sequences indicated that the circulating viruses were homogeneous and were closely related to topotype VII. Importantly, the newly emerged viruses were genetically closely related to strains isolated from Saudi Arabia, Sudan, Eritrea and Cameroon between 2000 and 2010, suggesting the dominant nature of this virus and underscoring the need for worldwide intensive surveillance to minimize its devastating consequences. 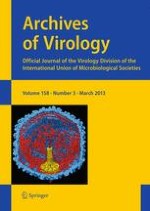 Molecular epidemiology of hepatitis C virus among different groups of people in the province of Fujian, China