Chronic overdrainage affects shunted patients producing a variety of symptoms that may be misdiagnosed. The best known symptoms are so-called shunt-related headaches. There is mounting evidence that changes in cerebrospinal venous system dynamics are a key factor to the pathophysiology of chronic overdrainage syndrome.

We report the case of a 29-year-old woman with a shunt since the postnatal period suffering from chronic but the most severe intermittent headache attacks, despite an open shunt and with unchanged ventricular width during attacks. Intracranial pressure (ICP) recordings were performed during headache attacks and thereafter.

Massively increased ICPs, a continuous B wave “storm,” and severely compromised intracranial compliance despite an open shunt were found, a scenario that was always self-limiting with the resolution of symptoms after several hours. When mobilized to the upright position, her ICPs dropped to − 17 mm Hg, proving shunt overdrainage. 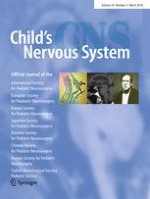 Dolichoectasia of the anterior cerebral arteries: a rare cause of headache in a young child

The supraorbital eyebrow approach for removal of craniopharyngioma in children: a case series

Recurrent bacterial meningitis—devil is in the details