The introduction of rifampicin (rifampin) into tuberculosis (TB) treatment five decades ago was critical for shortening the treatment duration for patients with pulmonary TB to 6 months when combined with pyrazinamide in the first 2 months. Resistance or hypersensitivity to rifampicin effectively condemns a patient to prolonged, less effective, more toxic, and expensive regimens. Because of cost and fears of toxicity, rifampicin was introduced at an oral daily dose of 600 mg (8–12 mg/kg body weight). At this dose, clinical trials in 1970s found cure rates of ≥ 95% and relapse rates of < 5%. However, recent papers report lower cure rates that might be the consequence of increased emergence of resistance. Several lines of evidence suggest that higher rifampicin doses, if tolerated and safe, could shorten treatment duration even further. We conducted a narrative review of rifampicin pharmacokinetics and pharmacodynamics in adults across a range of doses and highlight variables that influence its pharmacokinetics/pharmacodynamics. Rifampicin exposure has considerable inter- and intra-individual variability that could be reduced by administration during fasting. Several factors including malnutrition, HIV infection, diabetes mellitus, dose size, pharmacogenetic polymorphisms, hepatic cirrhosis, and substandard medicinal products alter rifampicin exposure and/or efficacy. Renal impairment has no influence on rifampicin pharmacokinetics when dosed at 600 mg. Rifampicin maximum (peak) concentration (Cmax) > 8.2 μg/mL is an independent predictor of sterilizing activity and therapeutic drug monitoring at 2, 4, and 6 h post-dose may aid in optimizing dosing to achieve the recommended rifampicin concentration of ≥ 8 µg/mL. A higher rifampicin Cmax is required for severe forms TB such as TB meningitis, with Cmax ≥ 22 μg/mL and area under the concentration–time curve (AUC) from time zero to 6 h (AUC6) ≥ 70 μg·h/mL associated with reduced mortality. More studies are needed to confirm whether doses achieving exposures higher than the current standard dosage could translate into faster sputum conversion, higher cure rates, lower relapse rates, and less mortality. It is encouraging that daily rifampicin doses up to 35 mg/kg were found to be safe and well-tolerated over a period of 12 weeks. High-dose rifampicin should thus be considered in future studies when constructing potentially shorter regimens. The studies should be adequately powered to determine treatment outcomes and should include surrogate markers of efficacy such as Cmax/MIC (minimum inhibitory concentration) and AUC/MIC. 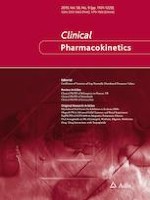 Population Pharmacokinetic and Pharmacodynamic Analysis of GLPG1690, an Autotaxin Inhibitor, in Healthy Volunteers and Patients with Idiopathic Pulmonary Fibrosis

Correction to: Clinical Pharmacokinetics of Atypical Antipsychotics: An Update