There are no published data concerning management of patients with exteriorized colonic prolapse (CP) after intersphincteric rectal resection (ISR) and side-to-end coloanal manual anastomosis (CAA) for very low rectal cancer. The aim of the present study was to report our experience in 12 consecutive cases of CP following ISR with CAA.

From 2006 to 2014, all patients with very low rectal cancer who developed CP after ISR and CAA were reviewed. Demographic and surgical data, prolapse symptoms and treatment were recorded. Postoperative morbidity, functional outcomes and results after prolapse surgery were recorded.

Twelve out of 143 patients (8 %) who underwent ISR with side-to-end CAA for low rectal cancer presented CP: 7/107 ISR (7 %) with partial resection of the internal anal sphincter (IAS) and 5/36 ISR (14 %) with subtotal or total resection of the IAS (NS). CP was diagnosed after a median of 6 months (range 2–72 months) after ISR. All patients with CP suffered from pain and fecal incontinence. Median Wexner fecal incontinence score before surgery was 16.5 (range 12–20). Three patients refused reoperation. Nine patients underwent transanal surgery with prolapse resection (including colonic stump and side-to-end anastomosis) and new end-to-end CAA (with posterior myorraphy in 4 cases). After a median follow-up of 30 months (range 8–87 months), 3/9 patients (33 %) had CP recurrence: One with very poor function was treated by abdominoperineal resection and definitive stoma. The 2 others were successfully reoperated on transanally. Median Wexner fecal incontinence score after CP surgery was 9 (range 0–20). No CP recurrence was noted for the 6 other patients, and function improved in all cases. Thus, at the end of follow-up, 8/9 patients (89 %) had no recurrence after surgery.

We believe surgery must be attempted in these patients who develop CP after ISR with CAA for very low rectal cancer in order to improve function and symptoms. A transanal approach with CP resection and new end-to-end anastomosis appeared to be safe and effective. Larger studies are needed to confirm our results. 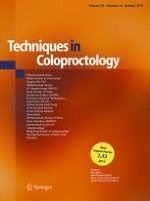