To evaluate the efficacy of pap smear, HPV DNA testing and colposcopy and to determine the approach for cervical cancer screening in low resource settings.

Sensitivity and diagnostic accuracy of HPV DNA test is more than that of pap smear and the test is not influenced by inflammatory conditions of vagina. In low resource settings, women with ASCUS and LSIL on cervical cytology should be subjected to HPV DNA test and only if found positive should be referred for colposcopy thereby reducing colposcopy referrals. Women with HSIL should be directly subjected to colposcopy guided biopsy. Using this approach, most of the preinvasive cervical lesion will be detected but few cases will still be missed among inflammatory smears, if HPV DNA testing is not supplemented. 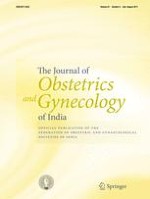 Estimation of Lipid Profile in Subjects of Preeclampsia

Use of Mesh in Vaginal Pelvic Organ Prolapse Surgery

Indian Contribution to Obstetrics and Gynaecology