This study aimed to present the long-term results of the consolidative technique otoplasty (CTO).

Patient age, sex, duration of follow-up, and how the deformity (bilateral-unilateral) occurred were determined. The kind of anesthesia, duration of surgery, surgical techniques used during the operation were reported, and the preoperative and postoperative distances between the ear and head were measured at four points (SUP: The highest point of the helix; SCA: the concha superior sticking points; ICA: stick point of Concha at the inferior; and lobular). Early- and late-term complications were recorded in the postoperative period.

A total of 63 (21M–42FM) patients whose average age of 21:41 ± 8.96 (7–41), 119 ears (Right: 58/Left: 61) were operated on with this technique between 2013 and 2015. Mean follow-up was 18:22 ± 9:42 months. Anterior scoring was performed for three patients; concha resection was performed in 17 patients. Fifty-five patients were operated on as primary otoplasties and eight were secondary otoplasties. When the preoperative and postoperative SUP, SCA, ICA, and lobule measurements for both ears were compared, the postoperative values were found to be significantly decreased (p < 0.001).

This technique may be an alternative in the repairs of prominent ears, and it provides an intervention opportunity for all the anatomical structures. 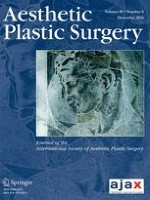 Palatal Perforation as a Rare Complication of Nasal Septoplasty

Efficacy of Liposuction as a Delay Method for Improving Flap Survival

To Be Real or Virtual? That is the Question…

The Effect of Hyaluronic Acid Application on the Perisilicon Capsule Structure