To study the damaging effect of different diode laser settings on vocal folds 7 days after injury in a rabbit model.

The extent of the inflammatory infiltrate and ablation crater were greater when using 5-W optical power compared with 3 W. The extent and depth of the inflammatory infiltrate, and the width and depth of the ablation crater were greater with continuous wave mode compared with pulsed mode. The density of collagen fibers only increased when using the laser in continuous wave mode. 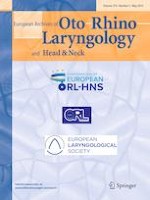 Ossicular chain erosion in chronic otitis media patients with cholesteatoma or granulation tissue or without those: analysis of 915 cases

The effects of endoscopic sinus surgery on pulmonary function in chronic rhinosinusitis patients with asthma: a systematic review and meta-analysis