This study, included in the prospective survey of candidaemia in Europe supported by the European Confederation of Medical Mycology, presents the epidemiological and antifungal susceptibility results of 290 cases of candidaemia (80 in children <15 years old) reported from September 1997 to August 1999 by 19 Spanish hospitals. Presence of an intravenous catheter and previous antibiotic therapy were the most frequent risk factors. The percentages of the four most common species isolated (adults/children) were as follows: Candida albicans (46/36.2), C. parapsilosis (21.9/50), C. tropicalis (12.8/3.75), and C. glabrata (10.1/5). As initial therapy, fluconazole was preferred in adults (54%) and liposomal amphotericin B in children (58%). The 30-day mortality rate was 40.6%, and the species most frequently associated with a fatal outcome was C. krusei (60%). The rates of susceptibility to antifungal agents were as follows: amphotericin B, 91%; flucytosine, 99%; fluconazole, 93.6%; itraconazole, 87.4%; and voriconazole, 92%. These results provide baseline data for future epidemiological and susceptibility studies and for evaluating the impact of new antifungal agents on the distribution of species and the mortality rates associated with candidaemia in Spain. 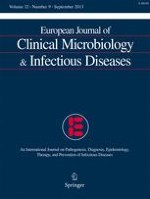 Optimizing fluoroquinolone utilization in a public hospital: a prospective study of educational intervention

High prevalence of hepatitis B virus infection among tuberculosis patients with and without HIV in Rio de Janeiro, Brazil