Constituting 25–30 % of all head and neck cancer cases, laryngeal carcinoma is the most prevalent entity. Major risk factors of laryngeal cancer are smoking and excessive alcohol consumption. This study presents the recent developments in the incidence of laryngeal cancer from 1998 to 2011 in Germany. Laryngeal carcinoma was identified using International Statistical Classification of Diseases and Related Health Problems (ICD10) from German population-based cancer registries. The incidence was provided by the Robert Koch Institute, and the mortality data were derived from German death statistics for further evaluation. Both descriptive and analytical analyses were conducted. From 1998 to 2011, a total of 14,847 laryngeal carcinoma cases were reported, in 13,195 men and 1652 women. Glottic carcinoma represented the main entity, constituting 69 % of male cases and 50 % of female cases. For men, a decline in incidence was observed starting in 2006. The incidence rate for women remained stable for the period of observation. The incidence of laryngeal cancer resembles the development of smoking behaviour in Germany. To maintain the positive trend of the male population and to reduce the incidence in women, it is crucial to continue and to improve the prevention of smoking campaigns in Germany. 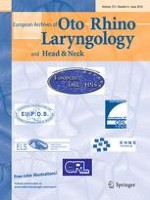 The effects of bone pâté on human osteoblasts cell cultures