Blastocystis sp. is the most common intestinal parasite isolated in humans. The aim of the study was to describe the risk factors associated to Blastocystis sp. detection. A case-control retrospective study was carried out at Vall d’Hebron University Hospital (Barcelona, Spain), which receives all fecal samples collected in Barcelona at primary care level. Eligible patients were patients older than 18 years in whom three consecutive stool samples were examined for parasitic diagnosis from January to December 2017. Positive patients for Blastocystis sp. were assigned as cases whereas negative patients were assigned as controls. Overall, 4174 patients were eligible for the study, from whom 724 (17.3%) had Blastocystis sp. detection. From these, 170 cases (Blastocystis sp. positive) and 170 controls (Blastocystis sp. negative) were randomly selected for inclusion. One hundred and twenty-six (37.1%) of them were immigrants, and 171 (50.3%) patients had traveled out of Spain the year before. The majority of individuals had jobs with no direct contact with other people (health personnel, teachers, and caregivers) (85.6%), and 29.4% were in usual contact with animals. Regarding clinical information, 68.2% of patients presented digestive symptoms, 3.5% presented an immunosuppressant condition, and 6.5% were infected by other intestinal parasites. Variables associated to Blastocystis sp. detection were being born in Africa, having traveled abroad, and working in direct contact with other people. Having other intestinal parasitic infections had a protective value. Our study provides new insights into the epidemiology of Blastocystis sp. in industrialized countries. 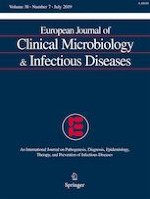 The clinical value of aquaporin-4 in children with hand, foot, and mouth disease and the effect of magnesium sulfate on its expression: a prospective randomized clinical trial

The impact of bacteremia on lipoprotein concentrations and patient’s outcome: a retrospective analysis