To assess the outcome of low risk prostate cancer (PCa) patients who were candidates for active surveillance (AS) but had undergone robot-assisted radical prostatectomy (RARP).

We reviewed our prospectively collected database of patients operated by RARP between 2006 and 2014. Low D’Amico risk patients were selected. Oncological outcomes were reported based on pathology results and biochemical failure. Functional outcomes on continence and potency were reported at 12 and 24 months. Continence was assessed by the number of pads per day. With respect to potency, it was assessed using the Sexual Health Inventory for Men (SHIM) and Erectile Hardness Scale (EHS).

Out of 812 patients, 237 (29.2%) patients were D’Amico low risk and were eligible for analysis. 44 men fit Epstein’s criteria. 134 (56.5%) men had pathological upgrading. Age and clinical stage were predictors of upgrading on multivariate analysis. 220 (92.8%) patients had available follow-up for biochemical recurrence, potency, and continence for 2 years. The mean and median follow-up was 34.8 and 31.4 months, respectively. Only 5 (2.3%) men developed BCR, all of whom had pathological upgrading. Extra capsular extension and positive surgical margins were observed in 14.8 and 19.1%, respectively. 0 pad was achieved in 86.7 and 88.9% at 1 and 2 years, respectively. Proportion of patients with SHIM > 21 at 1 and 2 years was 24.8 and 30.6%, respectively. Moreover, patients having erections adequate for intercourse (EHS ≥ 3) were seen in 69.6 and 83.1% at 1 and 2 years, respectively. Functional outcomes of patients fitting Epstein’s criteria (n = 44) and patients with no upgrading on final pathology (n = 103) were not significantly different compared to the overall low risk study group.

This retrospective study showed that RARP is not without harm even in patients with low risk disease. On the other hand, considerable rate of upgrading was noted. 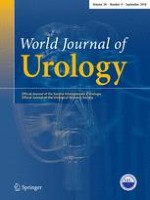 Epidemiology and screening for renal cancer