The online version of this article (doi:10.​1007/​s10620-016-4074-9) contains supplementary material, which is available to authorized users.
This manuscript was presented as an abstract at ECCO Barcelona 2015 and DDW Chicago 2014.
Dov Wengrower and Benjamin Koslowsky contributed equally to this study.

A prospective blinded comparative study was conducted over a 3-year period. IBD patients and controls underwent a complete otorhinolaryngeal examination and eudiometry test.

Hearing loss may be another EIM of IBD. It is found in 38 % of IBD patients and in up to 52 % of patients with other EIMs and increases over the age of 40. Early hearing evaluation should be recommended to these high-risk IBD patients. 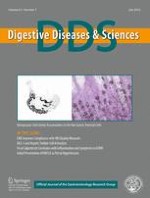