A retrospective study that included three eyes (three patients) with RPE aperture and age-related macular degeneration (AMD) evaluated at the Macular Clinic in Tokyo University Hospital. A three-dimensional dataset of depolarization information was obtained with a clinical prototype of PS-OCT.

The RPE aperture was characterized as a round discontinuity of depolarization. The findings with PS-OCT suggest atrophic changes in the overlying RPE of the PED. The degree of depolarization was associated with retinal sensitivity. The current results indicate that RPE apertures developed within the spectrum of atrophic AMD. 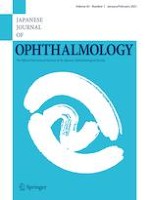 Comparative study of topical regimen for adenoviral kearoconjunctivitis by 0.1% fluorometholone with and without polyvinyl alcohol iodine

Role of oncostatin M in the pathogenesis of vernal keratoconjunctivitis: focus on tissue remodeling