Diabetic macular edema (DME) frequently presents bilaterally. In case of bilateral retinal disease, the visual impairment (VI) and the visual acuity (VA) are strongly correlated to the better eye. The aim of this study was to assess the impact of ranibizumab intravitreal injections (IVR) on VI in patients with simultaneous VA loss due to DME.

This was a retrospective two-center study including consecutive DME patients with visual loss treated with ranibizumab since November 2011 and with a minimum follow-up of 6 months. Patients with bilateral visual decrease from DME undergoing IVR within 6 months of each other were included. 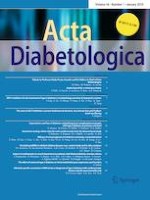 Efficacy of urinary glucose for diabetes screening: a reconsideration

Autonomic testing: which value for each cardiovascular test? An observational study